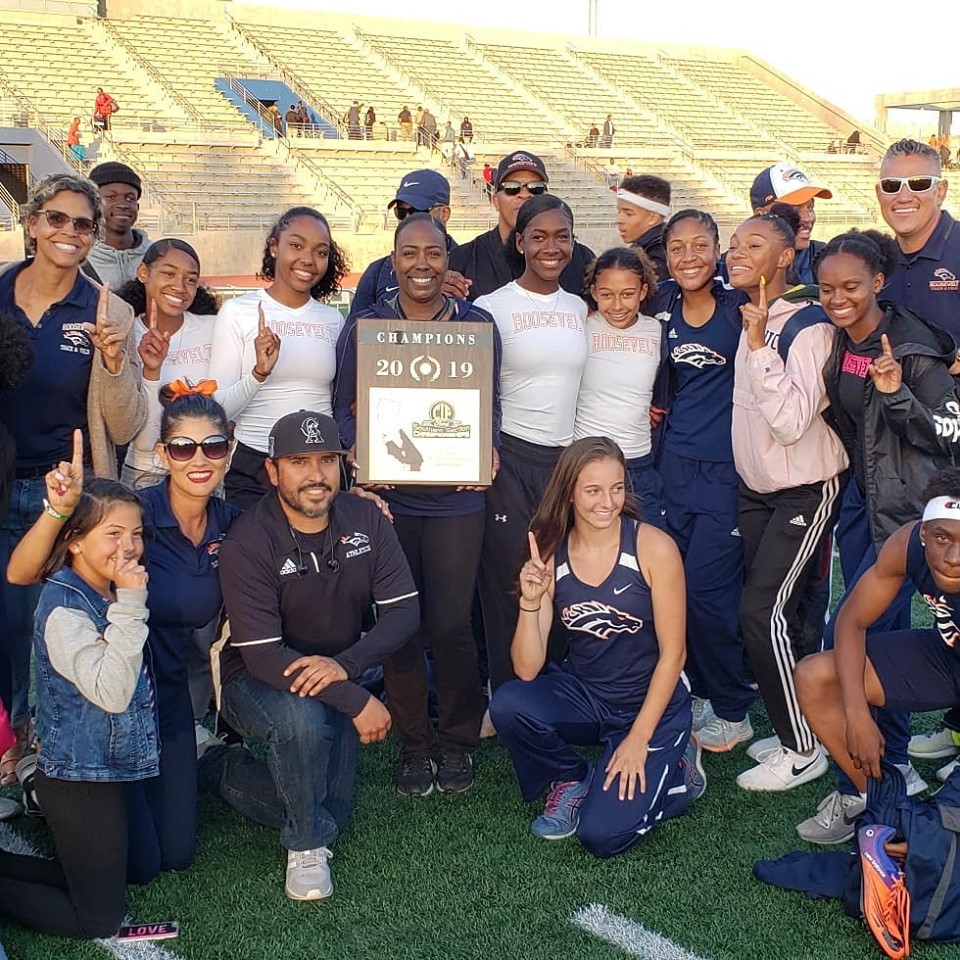 This has been the year of Girls athletics here at ERHS, Girls Basketball and Softball both reached semi-finals (Girls Softball plays tomorrow) and your Girls Water Polo team captured the Div. 5 Team Title. It is the CIF Div. 1 Track and Field Title is the title that some coaches consider to be the hardest to attain in the CIF-SS, with the next being the CIF Div. 1 Football title. It takes a group of student athletes putting together their best performances on the same day and when one has an off day another needs to step up to help make up the difference and that is exactly what happened on Saturday afternoon.

Your Girls Track and Field team had a CIF squad that consisted of 16 entries into the CIF Prelims with 10 making it to finals. Those 10 entries scored in every event that they were entered into on the way to a 58-56 Victory over Perennial Track Power Long Beach Poly. It was a full team effort in every sense of the phrase. Prior to the meet starting the coaching staff created different scenarios on how the day may play out and what it would take to win, at the end of they day all scenarios were off and still led to the main goal. Track and Field Scoring goes (1st- 10pts, 2nd-8pts, 3rd-6pts, 4th-5pts, 5th-4pts, 6th-3pts, 7th-2pts, 8th-1pt)

Let’s start with the beginning of the day that began with our first field Girls Shot Put. Lydia Liu who has been one of the most consistent athletes in the CIF-SS year round placed 4th in the event going into it ranked 2nd, 5 pts. The next event up was the Girls Long Jump, Chaselyn Amos jumped 17’9.75 which was good enough for a 5th place medal and 4 more points. The Girls 4×100 relay of Jessica Boyd, Naomi Johnson, Jordyn Crutchfield and Amaia Johnson got the stick around the track flawlessly rolling to a school history best 2nd place finish, 8 more points. After 3 events the girls had racked up 17 pts. The 400m was our next scoring event with Naomi Johnson the #1 Freshman in the state in the event expected to finish in the top 2 based on seasonal bests, an somewhat off day but still a great time earned her a 4th place finish and 5 more pts for the team, putting them at 22 pts. The next event was the 100m and at the time we thought was the dagger in the heart with Long Beach Poly taking 1st and second place in the event for 18 big pts after their 4×1 win (10 pts), a combined 8 pts in the Long Jump and 5th place in the Shot Put they were sitting at 40 pts. Your Mustangs were down by 18 pts.

At this point LB Poly had 3 more events to score in the 300H, 200, 4×400, all of which they were ranked #2 in two of the events with them being ranked #1 and expected to win in the 200m. Your Mustangs had 5 events left to score in 800m, Discus, Pole Vault, 300H and 4×400. Alexys Ford in the 800m ran a smart race and placed 6th overall for 3 more points, now 25 for the team, to help close the gap. Then a glimmer of hope was thrown in the mix quite literally.. Lydia Liu just threw a school record to win the Discus by 1 ft over the CIF-SS Favorite from West Ranch, earning the girls 10 much needed points, moving the girls to 35 now on the day. Now the girls were within 4 points of LB Poly who had the 300H up next. At this time the girls Pole Vault was taking place and Great Oak who was also in the mix had their top vaulter going attempt for attempt with Senior Erika Flaherty, who looked calm and collected. She had cleared her first two heights on first attempts which, 3rd and 4th on her second which in the end was enough to finish 2nd place in the event and earn our girls 8 pts, putting the team at 43 on the day now ahead of LB Poly by 4.  During her attempts at the PV the 300H race was lining up with LB Poly’s #1 Hurdler who was #2 in the section lined up against our own Myah Hatcher and that’s when the shot heard around the stadium occurred. As the girls were shot off to begin their race a second gun was fired.. some had false started but whom?? We sat hoping it was not our own athlete and then watched as LB Poly’s hurdle walk off the track after being Disqualified for a false start. LB Poly now took 0 pts in an event they were expected to take 8 on the day.. now things were getting interesting. Myah Hatcher lined back up and ran a smooth and controlled race to earn 4th place and 5 more points, moving your Mustangs into a 48-40 advantage. Now it comes down the to 200m… Corona’s Egbe Ndip-Agbor had the upset of the day out distancing LB Poly’s athlete in the 200m to secured her first CIF Title and force LB Poly to earn only 8 pts in the event. Now the teams were both tied 48-48 with only the girls 4×400 to go. 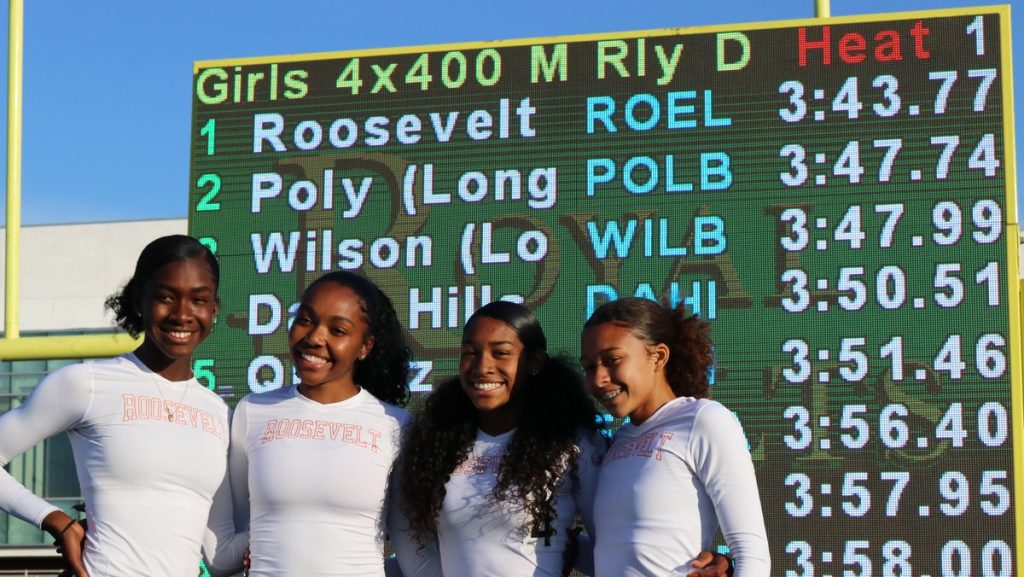 In between these events we had our boys competing in the Pole Vault where both boys medaled in the event matching season bests in the event. Senior Ethan Amata cleared 15’6 for a 3rd place finish and fellow Senior Jacob Camarena cleared 15’0 for a 4th place finish as they both stamped their ticket to the CIF Masters Meet. Junior Raul Chavez had tough 3200m race to finish off season in the middle of the pack during the 3200m Final to conclude his season, his effort was admirable after fighting sickness all week long.

The Girls 4×400 was next and the coaching staff knew what was at stake and did not disseminate to the girls what was possible and what was at stake and just let them run. They have been determined to win the 4×400 title after taking second last year on a lean at the 2018 Finals. They have had the #1 time in the state all season and looked poised and confident. This is the equivalent of having your best free throw shooter on the free throw line with time expired and needing them to make both for the win, you know they are both most likely going in but based on how the day was going you can’t write it in stone just yet. Once the gun went off Sophomore Jordyn Crutchfield made sure we never had to look back running an amazing 1st leg and handing it off in the lead to Senior Alexys Ford who opened the gap a little bit more. Alexys would hand off to Sophomore Amaia Johnson who ran a smart leg and did not give up any ground as LB Poly and Wilson battled with each other to try to catch up to your Mustangs. Amaia handed it off to Frosh Phenom Naomi Johnson who crushed the last leg to help lead your Mustangs to an impressive School Record of 3:43.77, a full second ahead of the record setting relay from 2015 that included 2015 Gatorade Player of the Year Jasmyne Graham, to win by 4 seconds and secure your Mustangs 1st ever CIF Track and Field Team Championship! The girls add to the Track and Field legacy were the CIF Div. 1 Runner up in 2011, 2012, and 2013.

The Boys 4×400 team of Patrick Effiom, Jaylend Howard, Joshua Wilcox and Jalen Johnson ran a seasonal best in the 4×400 to medal taking 5th place overall and qualify for the CIF Masters Meet. The boys seasonal best time of 3:18.82 was good for the #5 mark on the day as they look to return to the state final. They will go into the Masters Meet ranked #5 and are currently ranked #8 in California.

The Masters Meet will take place this Saturday May 18th. All meet information is located at the link HERE. 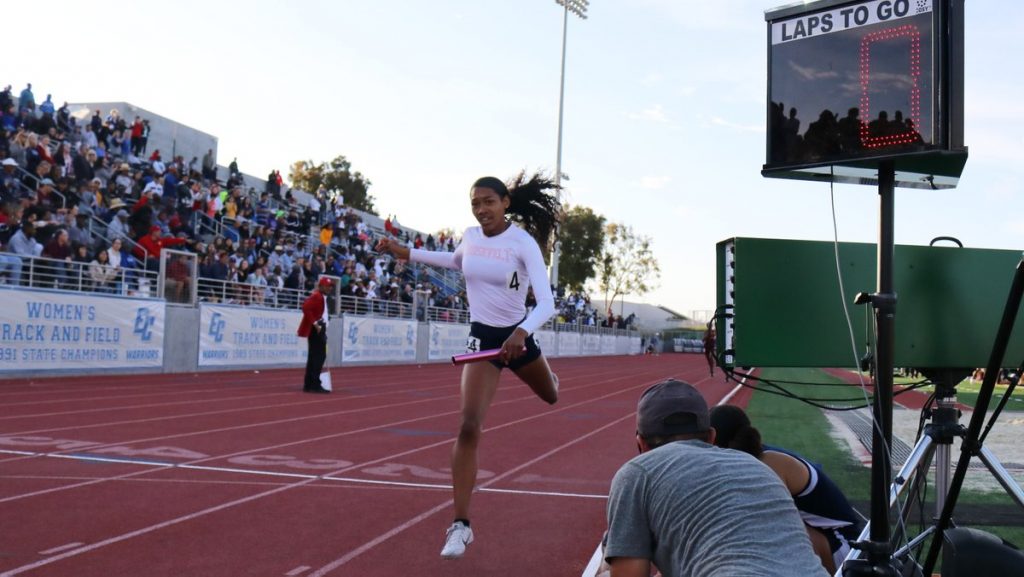 Here is a link to the Milesplit interview of our winning girls 4×400 squad: https://ca.milesplit.com/videos/380440

Below is a link to the Press Enterprise Article covering the CIF-SS Finals.