April 11th is just another day for many high school students just like Feb 8th was as well. But to high school seniors these dates mean much more, they mean hard work paid off, they took care of business not only on the athletic playing field but the classroom as well and making one of their first grown up decision… where they will be spending their next 4 years.

6 Mustangs signed NLI of intent for receiving some type of athletic scholarships and for some it was paperwork solidifying roster spots at their respective universitys. 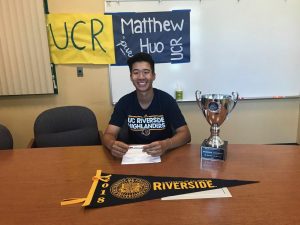 Senior Golfer Matthew Huo signed with UC Riverside one of the more improved golf programs in the area. Matthew is the most decorated golfer in ERHS history coming off his So Cal Regionals last year, barely missing the CIF State Meet. This year he has helped lead your Mustangs into new territory as well… possible league championship territory! With a few matches to go your Mustangs are locked up with ML King and Santiago and with some big wins could make more history!

Your Mustangs Track and Field program had 5 athletes join already committed Breanna Bernard Joseph (USC) to sign with a college to compete at the next level. 3 of those boys are coming off a historic fall Cross Country season where they were CIF-SS Runner Up, State Runner-Up and NXN qualifiers (National Meet – top 24 teams in USA). Tyler Spencer the reigning Riverside County XC Runner of the year accepted an athletic scholarship from LB State. Raymon Ornelas also accepted a full athletic scholarship from LB State as well. Tyler and Raymon made up the best 1-2 duo in the state of California this past fall which lead to huge successes both locally, statewide and nationally. The two boys have been running together since they were 6 years old and didn’t want that to stop anytime soon. 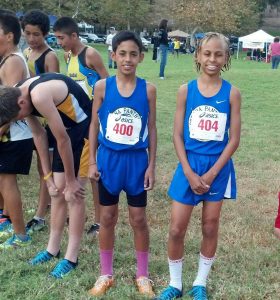 Joining Raymon and Tyler at LB State University will be fellow XC teammate and key part of the NXN squad in the fall Moises Rendon. Moises is one of the most improved distance runners in the Southern Section over the last year. Track 800m standout Wayne Richards will also be joining the crew coming off some big personal bests this track season. Wayne was a 3 year letterman in XC and a 4 year letterman in Track. Wayne was a part of the 2016 XC CIF State Meet 3rd place squad and an individual CIF qualifier last spring at 1600m. All 4 boys will be competing for LB State on their XC and Track teams.

Our lone girl signee on this day was Paloma Barron who signed to run for Cal State Fullerton in the fall. She is coming off her most successful season of XC and is continuing that success right now as she has improved in every event and has help set 4 school records this season both individually and on relays. Paloma’s success over the past year was due to a mind set change which caught the attention of several local universities. We are glad to see her continue her running career at the next level, no too bad for an ex-soccer player. 😉

Congratulations to all on your accomplishments!