Your Mustangs headed out over break to the 51st running of the Arcadia Invitational.  Arcadia is a hot bed for local, state and national talent who travel from all over the USA to compete in this Nike sponsored meet where the motto is… “Home of National Records”.  Student-athletes from over 600 schools attended and your Mustangs did their best to stand out in the events they competed in.  This year we brought a large contingent of the ERHS track team spread across all events. The meet is so large that is spans over two days with three separate sections of competition. The highlights are Friday night with Invitational relays and Saturday night with Invitational Individual events and relays. 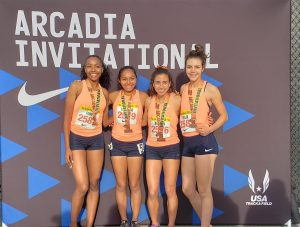 To kick off the weekend on Friday night, history was made! Three of our distance relay teams placed with action being kicked off with our girls 4×800 winning their first ever distance relay by over 14 seconds and also setting a school record in the process. The girls stayed in contention from the start then blew it wide open. Check out that race HERE. The girls team was made up of Alexys Ford, Miranda Camargo, Paloma Barron and Jewelyn Felix. Three of the 4 girls come back next season and look to make more history! 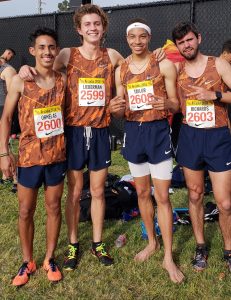 The nationally ranked boys 4×800 team took second place in the Invitational race, running the #8 time in the Nation. That team consisted of seniors Raymon Ornelas, Matthew Lieberman, Jackson Taylor and Wayne Richards. Our team is so deep that we had a second team in the same race that placed 12th beating other teams top groups. That team consisted of Joshua Potts, Ricardo Sainz, Tyler Spencer and Joshua Wilcox. Watch the boys race HERE

The girls continued to shine later on in the night with the girls 4 x 1600 team setting the second school record on the night with a 3rd place finish. They smashed the school record by over 20 seconds and narrowly missed winning their second event of the night. That team consisted of Miranda Camargo, Paloma Barron, Aily Camacho and Kimberly Pena. This was the first time our girls distance team has outshined the boys at Arcadia.

The boys 4 x 1600 was the last race of the evening and they stayed competitive while running a modified team due to an injury and reduced work load for some of our tops boys. The boys still managed to take 11th place overall out of 23 teams with an impressive effort by Michael Sahagun who came off injury to run his first race back in the 1600 under 4:35.. the team was lead by Raul Chavez who ran close to his personal best to lead off the team. The other two legs of the relay were Aaron and Matthew Lieberman in what will probably be the last time the siblings will race together in a team setting, not a bad way to end it!

In Saturday action we saw more school history made as Junior Ethan Amata became the first boy to medal in the Pole Vault at this prestigious event. Ethan placed 2nd with a clearance of 14’7″. Later on in the evening our stellar hurdler Breanna Bernard Joseph placed top 5 in both Invitational hurdle events to end off her impressive HS career at the Arcadia Invitational. The Girls Distance Medley team ran another near school record effort to take 16th in the ultra competitive race missing the school record by less than 2 seconds, that team included Kimberly Pena, Miranda Camargo, Paloma Barron and Destiny Stamps.

Your Mustangs will face off with league rival ML King to secure the BIG VIII League Title tomorrow at ERHS starting at 3 pm. Come on out and support in what is always a great meet!